The Crawling Horror of the Playerless DM

Interesting, to me at least, is the fact that while there is a super-abundance of players and games on G+, it can be somewhat difficult to actually get a game going as a DM.  That's my experience, I don't know how it goes for you, Dear Reader.

This is partly due to scheduling, and also partly due to the fact that no one knows me from fuck-all, except a couple of really cool people I've gamed with who are also hip deep in a couple of ongoing games, already.

So what's a floundering and up-coming DM to do?  Is there some method aside from the "attract-players-you-like-and-hope-for-the-best" approach?  It seems to me that my throwing out "game on Wednesday night" is bound to get about a less-than 30% success rate, even with a sound campaign that is well known and atmospheric (i.e. the Barrowmaze), and a system that has a strong foothold in a certain type of gamer (i.e. DCC).

These animated skeletons and the risen corpses of previous adventures are growing bored with sharpening their rusty blades.  Wights and wraiths and ghouls fight a slow and endless war to gain favour with Nergal, Kyuss, Gax, Nyarlathotep... let us say that the list of god-things that scrabble over the salted earth of the marsh is wearying and nigh endless.  What the campaign needs (when it starts) is something, not just the standard creepy horror, but some kind of imminent disaster.

I'm toying with an "apocalypse counter" a la some great Mythos-flavored board games that counts inexorably down to '0' at which time the horrors of the Barrowmaze will simply break free of their constraints of stone and turn the whole of the land around Helix into a hellish wasteland.  The only thing that offsets the countdown is the number of Luck points or XP earned by the party, in some totally unfair and unpleasant ratio.  The only way to stop it, well, I mean you'd need to have read it to know this but .... well, let us say there are clues in abundance if the players will only play.

In my head and campaign notes, I run the luckless meatshields I have at hand through the first few rooms, chuckling at their demise.  To turn them into dungeon dressing, or have them await the next batch of heroes in their undeath, that is the question!
Posted by Noah S. 1 comment:

The Tomb of the Ssessarids (map doodling)

So, thanks to G+ and the hangout phenomenon, I have been lucky enough to find a semi-regular play group. Got me really thinking about DM'ing again, although I love play and have insight that my role-play has become very very rusty.  One thing I really dig is tossing dice and generating PCs and NPCs from random stats.  I find that DCC does this very well with the luck roll and occupation.  I'm off after this to purchase a thing from RPGNow.

Meantime, the other thing I like to do is mapping.  I no longer have reams of maps I made as a wee git, plunging ever downward with my Kayen Telva (lifted from A1 The Slavepits of the Undercity) and magic markers.  However, with my fancypants scanner I am able offer a thing I made last night in a couple of hours, namely the tomb of the Ssessarids, the hideous mercantile family prone to internecine warfare with other traders in the capital city of Thrax.  They were rumored to be snake worshipers who mingled licentiously with reptilian things that slithered up from the pits beneath the capital city.  They searched for long-life or perhaps immortality but instead turned into a degenerate pack of corpse-eaters, lead in the end by a blue-black scaled she-demon.

In the interests of digitizing the thing, I had made a key but chopped it out with PS and cleaned it up with threshold etc.  I intended to feed it into Illustrator as a LiveTrace thing to clean up the lines but, meh.  I ran out of steam. 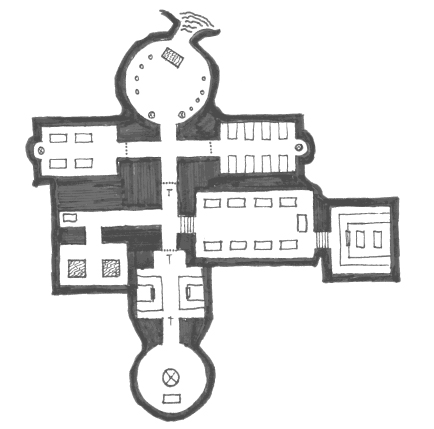 The entrance is an underground dome with a basin, guarded by caryatid columns who will attack if the players do not cleanse themselves in the basin's waters, first (Although this carries a risk of disease).  Packs of ghouls crawl from the various holes in the structure and broke free to maraud when the hidden entrance was revealed in a rockslide.  The whole complex is highly trapped - the Ssessarids loved Blue Cobra poison and the disfiguring scars that remain should interlopers not die shortly after injection.  At the far end of the complex, 'asleep' on his bier, lies the body of the clan's founder, a ghul sorceror of some potency who does not hesitate to call upon his patron's representative - an elegant Naga with the face of a seductress.  She has ties to the Yuan-Ti, and the crafty Serpent Men who first taught the clan to use and distill poisons, and who coached them in the arts of subterfuge.  Since the geological event that re-opened the tomb, the ghul raiders have swept into the nearby town nightly to feast on children, the elderly, and local beggars.  They had much wealth in life, and are jealous of their gold.

Anyways, it's all there in the map.  As always, the ascent is treacherous so take heede
Posted by Noah S. No comments: