So - picked up this thing by +Reid San Filippo (esteemed author of Crawling Under a Broken Moon).

It's called Mind Games. It's a supplement for DCC that shores up one place where I find that DCC doesn't scratch my 1st Ed. AD&D itch better than the original, namely the Psionics. It's funny now that I am older I notice that many, many monsters in the MM1&2 and FF have psionic abilities listed in the stat chunk. I never paid much attention to them, mostly because I think Psionics were frowned upon when I were a lad as an unnecessary, optional option that most people I played with did not opt. When you think about it, Psionics-empowered PCs ought to have been, like Paladins, rare as hen's teeth, given the dwindling, vanishingly unlikely statistics involved necessary to play one if you do (as Crom intends) 3d6 straight down the line. But hey, plenty of folks let their hair loose and upped it some, which I don't think I ever saw.
What Reid has done (and +Claytonian JP hinted at in The Wizardarium) is attached a nicely foreign and exotic system onto the DCC core rules, with very little in the way of changes to the base mechanics, in order to give you that weird flavor of yore back. The thing is chock full of cool stuff, and the art and layout are nicely done. (I hear there was a kerfuffle with print versions but I think it's fixed at the time of this writing). There are 20-something psionic powers of varying dangerousness, a new class, plenty of psionic items (watch for Living Crystal weapons in my campaigns in the near future), and a couple of really terrific monsters.  The Braingineers are like daleks, crossed with spiders, and so they're probably going to fall into my own games, soon.

Mindgames is just what I needed at this point, since I am thinking of siccing some ancient, slithery evil upon some friends at TridentCon, replete with Mind Blasts and Ego Whips and Polymorphing Demon Venom. David "Zeb" Cook is scheduled to attend, and my mind was transported to the Ancient Times when I fussed and fretted about snake cults in a city in the jungles of... I don't recall, was it Chult? Before Chult was a place? I don't know. Suffice it to say that The Dwellers of The Forbidden City charged my young brain with all kinds of images that laid dormant in there until I first view'd a version of King Kong (pretty sure it was Jessica Lange and a young The Dude). I recently had a vision in which I plopped the Forbidden City down with a Lost City erupting up from beneath, and +Kabuki Kaiser 's Kwantoom nearby, across the Pan Lung lake. Can you smell the lemongrass and strange spices? Olchak may give me a hard time about fetishizing the Far East, but it feels like something that hits me (granted I'm a white middle aged guy who was weaned on Saturday Afternoon TV and D&D) right in the tropes-lobe.


Okay, okay, back on track. Yuan-Ti. The demon-worshipping snake-men that everybody loves to hate, and doubly more so because the implicit body horror/snake phobia that gets you right in the amygdala from aeons dark and unremembered. On a glance at the stats below, they are bad ass and ought to send most low level parties fleeing and peeing and quaking and praying (6-9 HD with maybe a 0 armor class, plenty of spells, and psionics, also!) Good thing only 1-4 at a time, and I guess maybe accompanied by some cultists. I note that Deep Ones worry me more, since it's a metaphysical issue, but maybe later for that line of thought. The disciplines listed are B,D (Mind Thrust and Id Insinuation) and F,I,J (Mind Blank, Intellect Fortress, and Tower of Iron Will). With psionic 150 points, that's fairly bad ass, and most of these things will leave psychically undefended adventurers as synapse-shorted, howling idiots before the battle is even begun! Afterward, its disgusting worshippers will trundle you off to a dark cave and poison you into becoming a breeder for a new snake-thing, and (as Dragon #151 points out) if you fail and die during the process, they can neutralize poison you and try again...


So: Yuan-Ti need magic, lots of HD, and PSIONIC POWERS, and so where might we find some of those? Well, in Reid's new thing, that's where! 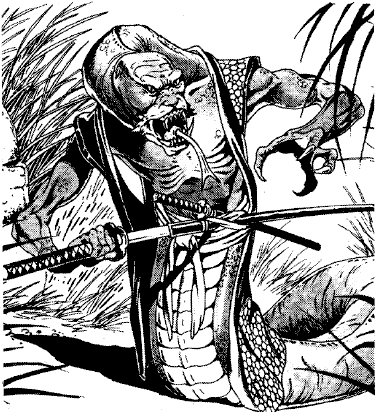 Psionic Defenses: Hard to say.. Needs development as a power, or maybe not, but boosting the Telepathy Focus Die to 1d10 seems sufficient to me for the moment in order to defend in Duels/Subjugation Battles.

The other forms of Yuan-Ti have lesser Hit Dice and 1 fewer Attack Powers, but they all know 1d4 (suitably reptilian in their manifestation) Wizard or Cleric Spells chosen randomly, in addition to Neutralize Poison and Bind to/Invoke Patron. For PAtrons, use Set/SSeth or that snaky one from AD&BiB or maybe that one from Dragon 150 or the other canonical Yuan-Ti one from your old-fashioned system of choice.


Post-Script for reference: These are the original 1e stats from Zeb Cook's Dwellers of the Forbidden City, to my knowledge the first appearance of this classic AD&D monster.

Living in tropical jungles, the yuan ti are a degenerate and corrupt race of creatures who were once human. All are devout demon worshippers and have a high regard for all kinds of reptiles. Through dark and unknown practices, their blood has become fouled, thus producing monstrosities, There are three types of yuan ti: purebloods, halfbreeds, and abominations.

Purebloods are the weakest of the yuan ti, having only 6 hit dice. They are human in appearance, except for some slight difference - scaly hands, a forked tongue, or a somewhat reptilian look about them. They are able to pass as humans 80% of the time. They normally handle affairs with the outside world, and may travel far and wide doing so.

Halfbreeds are highly distinctive. Some part of their body is that of a snake, while the rest is human. Appearance may be determined by the table below (rolling once or twice), or the DM may select the changes.
If any combination seems impossible or unworkable, the result should be ignored. The DM may also create other results involving snakes and humans.

In attacks, a snake-headed halfbreed will bite for 1-10 points of damage, snake-headed arms will bite for 1-6 points, and a tail will constrict for 1-4 points. Otherwise the yuan ti will be able to handle weapons as a normal person. All snake parts will have an armor class of 0. Halfbreeds have 7-8 hit dice.

Abominations are the strongest of the yuan ti. All have 9 hit dice. In appearance they are often confused with nagas and other snake creatures. Abominations are either totally snake- Iike or only have some human feature (such as a head or arms). Their bite (unless human-headed) will do 1-10 points of damage.

All yuan ti with human legs may move 12” per turn. Those with snake bodies move 9” per turn and are able to coil around pillars and the like. Human headed yuan ti are able to cast the following spells once per day:

Yuan ti speak their own language. They may also speak with any snake or snake-like monster. Those with human heads also speak Chaotic and Common.