So I picked up Dungeon Painter Studio on Steam. It's easy to use, that's good. I'm not 100% sold on it, for some reason, but there's not much to NOT like. It does just what it says on the package, and it was only 15 bucks or something. A lot of restrictions from the content makers about what you can/can't sell, which is fine - I probably wouldn't use their art in something I was going to sell as a #diy thing

So, like here is a couple of geomorphs, as close as I think I am able to discern to the tiles used in the game Treasure of Tarmin for the Intellivision, which was one that my young brain was not fully able to comprehend and also I had to give it back before I fully grokked it. It was not great, I think, although it was gameable and terrifically "roguelike" before that was even a thing...

So here's the geomorphs, hack 'em, peel 'em, fuck 'em up. I don't care. Believe it or not I did these in Illustrator CS4 a couple of years back but they weren't ever the right size. As much as I dig photoshop, the vectorness of Illustrator still eludes me. I think I might try to get them included in some fancy random dungeon makers, just for a kick.

Interstingly, the four bonus tiles I made were chopped off the bottom of the PNG, so I don't know. Still sorting out the doohickeys and thingamawhatsits 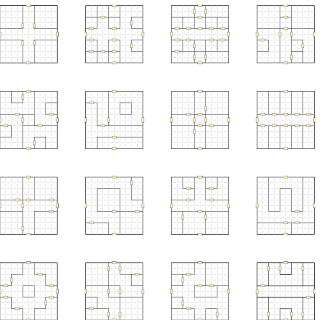