I happened to meet up with a pretty relaxed and mature group of Warhammer 40K players a month ago (May The Emperor's Light Always Shine Upon Meetup.com)
Done my second bi-weekly meet, now.  The take-away lesson is that I ought to always upgrade to 10 models worth of termies for a squad, and when you play 7 players on a table it's easy to drink a lot of beer.
I need to brush up on the rules, also.  Maybe finish painting these sisters and IG.
More on that, later.  The upshot was, our combined Space Wolves/Dark Angels/IG force won out against a Tau/Nurgle-ites force.  I enjoyed myself, even tho' I left about (apparently) half the way through.

Still gluing bits to the frame of the WW2 bomber.  Trying to think of a suitable base for it.  More pictures to follow.  Also, as a freebie I give you this (Pinterest is for girls and heretics, yes, but surprisingly useful for hobbyists):
http://www.ironhands.com/h2rivet.htm
If you take the Leap of Faith you will find a way to generate rivets like a Gobbo with a lick of red paint - that is to say quickly and cheaply and if it explodes then, hey, start again.
Posted by Noah S. No comments: 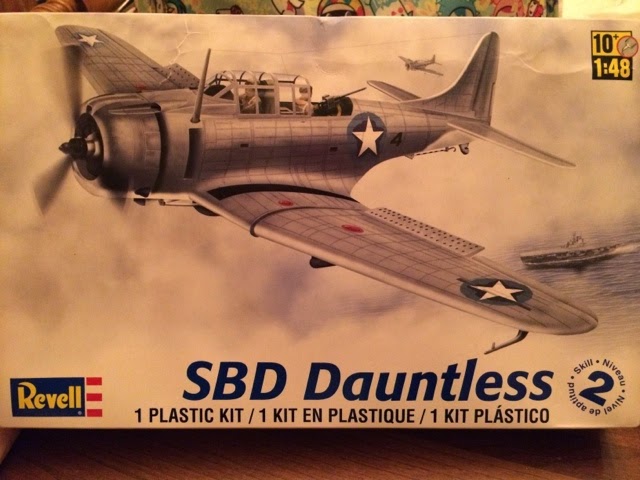 My next dumb little project is to bring this heathen Revell SBD Dauntless into the Emperor's service.  The Dauntless was a cool plane back in the day, a successful dive bomber and (most impressively) about 16.00$ at Michael's Hobby Store, and they always always seem to have it. I think I've been considering this project for like 5 years, now.  The 1/48th scale means that a 33mm fig ought to suit it nicely, but it looks like my plans might fit a little bit... Tightly.
For your comparison, the original pilot, here next to his IG Sentinel replacement 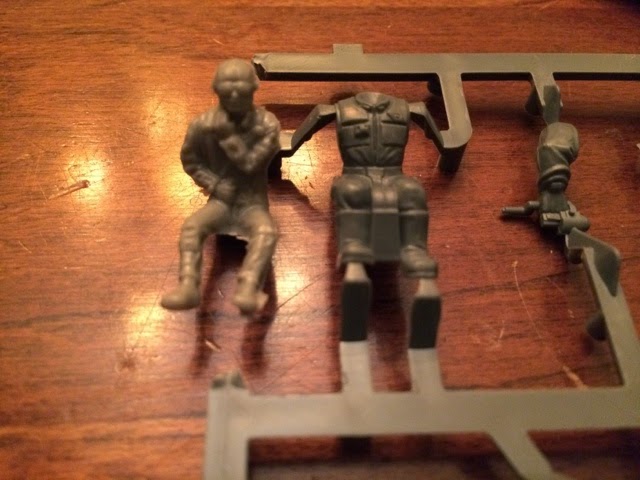 A cool thing is I get some free flight crew but they look a little weak and slight compared to their chunkier brethren.
I plan to magnetize this puppy up for various swaps out. I don't know why - the thing will never get play but I want to do it as a conversation piece and a homily on kit bashing; and of course it will be relaxing and fun.
I'll probably have torn out my hair by the end of it but wish me Luck.
Edits:  took a couple of hours an there's glue everywhere but here she is:
Ol' Betsy or Delilah or Daphne
A SBD-Harpy in the service of the Imperial Guard, Home Defense Force patrol squadron, call sign SBD-HH 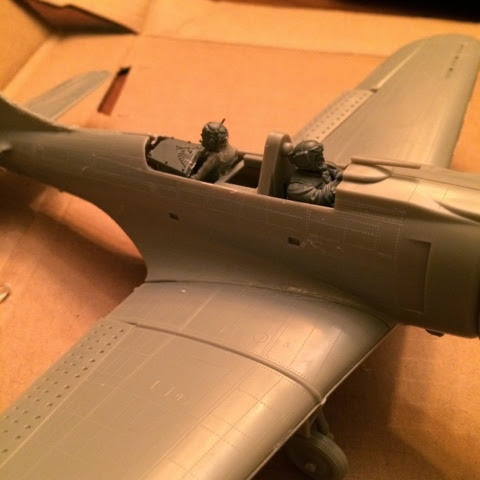 Captain Hank Hadrian (call sign "Henry")
Gunner/Spotter Alfred Alfgrim (call sign "Grouse")
Bomber Francis "Fuligin" Goreson (not pictured, below)
It's been a good long time since I've put together a non-chunky model, and there's a good deal of flash and poor design (taking it off the sprue with nippers should eat a part of the seam where the wing joins)
Lots of bits and greebles to add tomorrow night or something, but I'm gratified in that the magnetic tape strips fit nicely inside the wings, so the neodymium magnets sit on the surface as tight as a harpy's, uh, beak 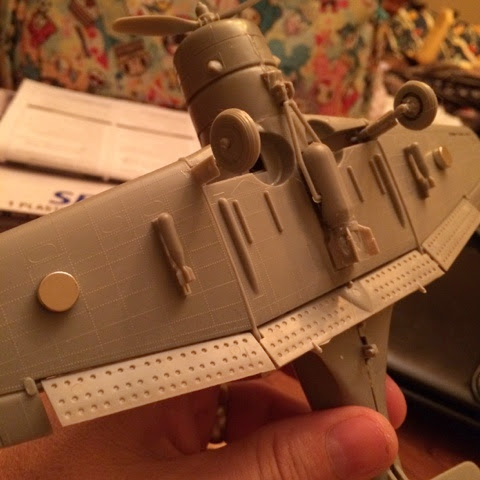 Also, the landing gear retract and deploy. That's pretty cool.  Now to figure out some flight stand and to affix the purity seals and strike the rotary engine runes
Let the Litanies of Liftoff commence, and warm the Blessed Promethium!
Posted by Noah S. No comments:

Butchering the Latin and Greek that was a focus of my early college education for a weak joke.  Nepenthe and Lethe where art thy cooling waters?
I don't think that posting miniatures and wargaming stuff will always appeal to my other blog's readers, so I'll keep it on here.  Expect superfluous notes and hasty iPhone pictures about my Dark Angels army and breaking into kit bashing and painting tips and other dumb stuff.

I sort of dig weird war games and might glom up some bolt action troops with some 40K and like some peanut butter in some chocolate maybe it'll be okay. A Genestealer Cult is the first order of business 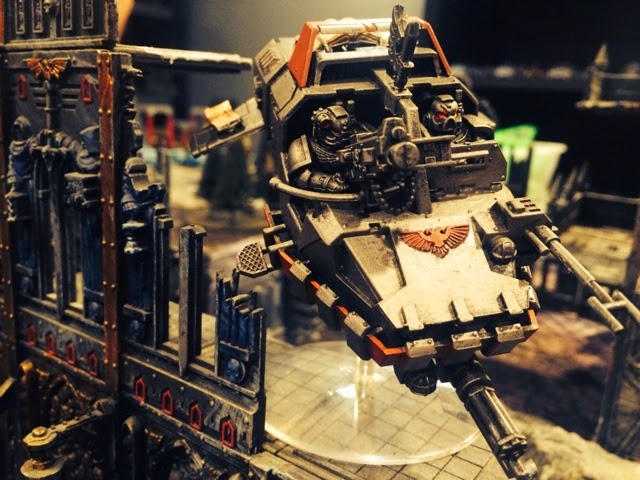 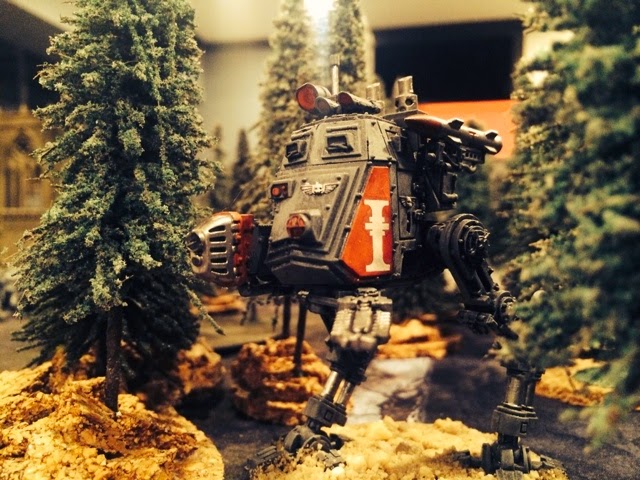 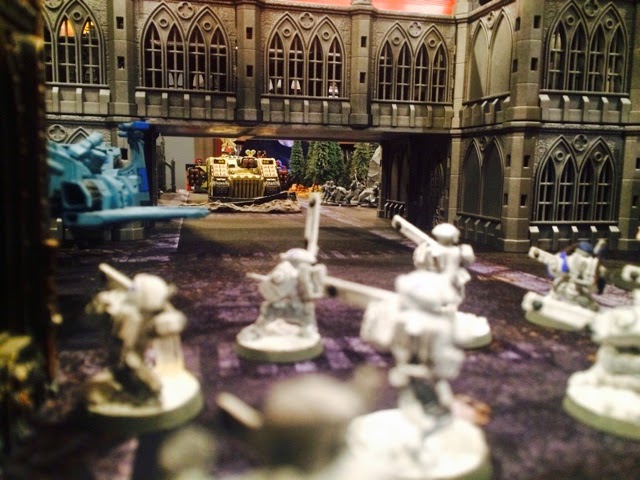 One last note - I'm intrigued at how well the iPhone is suited to take eye-level shots of wargames figs and terrain.  Hmm.

Reading Gene Wolfe's Claw of the Conciliator - it was recommended to me pretty highly by a slew of my favorite G+ Fantasy /Sci_Fi thinkers. Just last night passed the bit where the protagonist and his buddy are being chased through the woods by the deep black, tissue-paper-like Noctules, a life form that flits through the air hunting for body heat and physiological energy.  They come from an alien environment to Severian's Urth, and are used by unscrupulous persons as weapons of assassination but sometimes escape their handlers and turn on them. 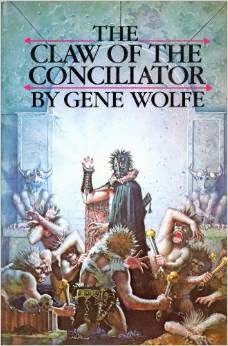 Once they smother and kill a target, they work their way into their mouths and nasal passages down into the target's lungs to absorb the remaining life-force and residual heat.  Cutting them with blades merely divides them into smaller versions, releasing a good deal of heat energy that washes over the target, causing low levels of heat damage.  They can be contained in air- and water-tight containers and will become dormant and can be hid away and disposed of but they take no damage from heat-based attacks and these only make them larger.  They may be drawn away from targets by a fire of sufficient size; clerical turning may disrupt them and cause their hateful forms to disperse for a time.

Should a living thing die from the attacks of Noctules, the Noctules will invade the lungs or similar organs and reproduce there, 1d10 more Noctules emerging a day later at dusk 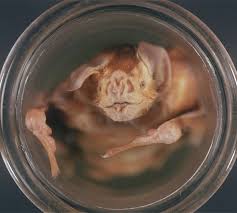 Flittering Horrors!
If you have detected the Noctules, and are able to postpone all other activities and flee, ROLL +DEX or +INT
On a 12+ evade the Noctules entirely through quickness of wit or action
On a 10-11, evade the Noctules, but they find another victim (an innocent one!), hold 1
On a 7-9, subtract 1 from the number of pursuing Noctules
On a Miss, they find you in the next encounter, and attack all parties
Spend the 1 hold to reveal the identity of the victim, express remorse or self-satisfaction, and gain 1XP

More Burroughs in Your RPGs

I visited an amazing bookstore today after work where I picked up a bunch of paperbacks (F. Lieber, Gene Wolfe, even the Dungeon of Dread DnD CYOA book).  But before that, I had a thread going with some of the guys about Burroughs - not E.R. the other one, William.  We always think it's E.R., though, don't we?  Anyways, on the way home I was lost in a creative fugue and missed my exit off the highway, and was worried after I would miss it again and nothing seemed right on the highway like WHERE THE FUCK AM I THIS DOES NOT SEEM FAMILIAR TO ME

EDIT: G_DAAAAMN CHECK THIS JUNK OUT AND GET ON THE RPG NOD

Me and +Evan Lindsey and +Alex Chalk and +Darien Mason and +Dave Younce played a game set loosely in Burrough's Cairo Interzone from Naked Lunch a couple of months back.  There I go, name-dropping again. Anyways, it goes hand in hand with the idea that all these possible realities crashed together after our initial Transylvanian Adventures game, in which super-science and occultism from a heretical Christian cult opened the doors of reality real real wide.  At the end James' Simon and Darien's Dr. Prometheus killed a couple of mutated cultists and ran afoul of The Abbot in a way so bad that blessed unconsciousness came for them and seared local reality into oblivion.  We haven't figured out what happened to Simon, but he was a character with promise.

"Okay, man, what does this have to do with games, man?" you ask.  Well, it got me thinking about Burroughs' cut and paste thing.  How could we stick a narrative version of cut n' paste writing into a game?  It would take a huge mid-narrative context shift and would need to be jarring for the players, I mean, that's kind of the point.  You can see how changes in the referential level work and how when they are not resolved they cause discomfort - check out the bit in Hoffstadter's Godel, Escher, Bach: an Eternal Golden Braid.  So, how do we go for this kind of discomfort in an RPG setting?  It does seem not easy - I think I saw James Raggi pull it off in the summon spell from LoTFP.  High level failures require a complete change in the milieu of the game and a switch of the DM/Judge/GM/Whatever.  I think this is brilliant and could be done with some good cooperation from a willing group of players, but it'd be hard to do outside of face-to-face...

INTERDICTED: ALSO THIS SHIZNIT, YOU HEADLESS RYKOR, YOU

So?  One way I propose such is to blow the lid of the genre conventions in the game abruptly and without warning, but in a way that fits tidily into the narrative established beforehand.  There're a couple of easily suggested ways depending upon your genre, but luckily when players put faith in fantasy tropes anything's possible.

I'm not going to give it away just yet, but my experiment ought to be complete quite soon.  Instead, here's a related but not entirely complete random list of terrible stereotypical accents I could maybe pull off in a pinch:

d20 Terrible NPC Accents by Noah during a game

1) Bad Cockney/Limey/East Ender (although I know full well there are many fine gradations of "Brit")
2) Bad German
3) Decent Yaley/Harvard Bastard (Ivy League Fucker)
4) Scotty from Star Trek
5) Orky
6) Western US/Country
7) Hillbilly (interestingly different from the Country one)
8) Terrible but hilarious Cold War Russian (not quite as good as +James Jeffers ' elf in Keep on the Borderlands)
9) Any kind of Hispanic accent from the Western Hemisphere (including awful terrible cartoon stereotypes)
10) Aussie Dingo Dundee
11) East Indie
12) Rasta Guy
13) Surfer Dude
14) Valley Girl
15) New Yorker
16) Philly/Jersey Pete (but I can't control it well and it drifts into 17, below)
17) Boston Southy
18) Shogunese (but to do the accent properly I have to do only nonsensical gibberish like a Samurai in full-on death mode)
19) South Africaner (Afrikaans English - also terrible)
20) Frenchie the Baguette Skunk