You won't believe my frame rate! Haha - JK I'm messing with you. But am I, really? 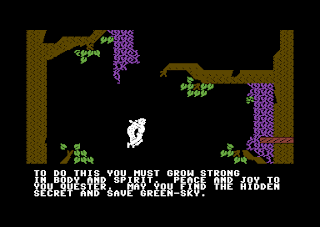 So I remarked to a friend the other day that even though they are cooking up 6th edition D&D right this moment, I'm just now getting used to 5th edition and starting to see that it's not as lame as I first anticipated back in the Google Plus days. At that time, I lamented something like "I've got DCC, Labyrinth Lord, d20, AD&D, Moldvay/Cook, Call of Cthulhu... why would I need ANOTHER edition of D&D?" You must understand, I just had purchased the Codices for my imperial troops in Warhammer 40K and they dropped 7th, or maybe 8th, or maybe I missed one? Anyways, too many editions, amiright?

Fast forward to last week, I just beat Calamity Ganon in Breath of the Wild on my kid's Nintendo Switch. If I may say, so, I must say the way I did it was pretty epic - I bounced his own big-ass laser beam back at him with my Hylian shield and it was down to the wire, too. I think it was my third try. Breath of The Wild is pretty amazing not because of it's cartoony graphics, or its well-developed protagonist, or its novelty or anything. It's amazing because you can spend a day or two running around the tutorial part of the game (the Plateau) thinking "Damn this place is big!", solving puzzles, engaging in classic Legend of Zelda-style play and then once you get the tools you need to open up the rest of the gaming world it's like KABOOM. It's gigantic! A lot of it is, admittedly, sort of big and empty and just running around exploring and climbing and beating up mobs or getting your shit pushed in by the occasional super-mob sub-bosses. I've got like 25 hearts now, and still getting my ass handed to me by the lion-centaur guys.

It's great because of the paraglider, and because it's non-linear for the most part! When you see a vast open space before you, you can often climb up the nearest cliff or tower, look around with binoculars, spot something to check out and WHEEEEEEE paraglide over to it and check it out. You don't even necessarily have to do any of the side-quests or anything, you could kind of just gather ingredients and cook stuff and run around looking at stuff. There's even a whole section of the map that is entirely optional - one gets the sense that it was meant for bigger stuff that must have been edited out for time. The game even provides a down-hill shield-skiing mechanic for making your way downhill quickly but it wears out your shields - why would I do that when I've got this totally kicking paraglider? 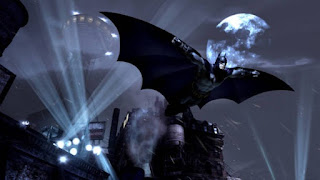 Anyways, BotW has that wide-open, run around agape looking at stuff, beating up monsters and sometimes running away feeling that I like in D&D. I distinctly recall that after I'd finished Fallout 3 and the DLCs for it, I got a "no deaths from jumping" mod and spent my time climbing to the highest points of the game and jumping off of things - night-time, day-time, exploding bombs behind me. I think at one point I was actually trying to figure out how to import a hang-glider or low-gravity parachute model into the game but it's beyond my limited ken.

I suggest you leave airships, binoculars, cars, teleporters, pegasi, telephones, telegraphs, trains, giant-robots, starships, rockets, warpgates, portals, computers, networks, the whole shebang. Give the players reasons to explore and a fun time exploring and the rest of the game will practically play itself. I just got access to a playtest version of "Wasters" RPG testing doc which has a procedurally generated burned-out city and a system for populating it with factions and generating missions etc. and I think it'd be cool to drop into my local face-to-face game. We'll see.

Keep on paragliding and exploring. Seriously the Zelda folks need to do a Nausicaa game with air-to-air combat c'mon folks just money on the table right there

My question, at base, is "What makes an oldhammer Ork or Goblin what it is?" Is it gangly legs? Ape-y arms? A sense of humor and style? Googly eyes and a tongue stuck out sideways? A poser for the ages, I guess.

Long ago, I had two Blogger blogs. One was this one, the other was "The Crowquill and Lasrifle" and it was about my bad painting and weird 40K lists of witch-hunters and zealots and power armor. I folded it into this blog a few years ago, because really who needs two separate hobby blogs? Not me, that's for sure. Like a fish needs a bicycle! Next thing you know I'll be droning on about my Dead Cells/Dark Souls problem, or woodworking, or synths, or any number of other ways I escape the awful reality of the downward spiral of capitalism in its death-throes. The present becomes the future and it's going to be grimdark, if you get my meaning.

The C&L is no longer extant, but I still plastic-minis hobby, for sure. I don't play enough (Frostgrave and Bloodbowl every few years at this rate).  I got it into my head some time ago to make a mostly-goblins and Oldhammer orcks list for 6th (maybe 4th?) edition Warhammer Fantasy Battle. Also, Undead (Vampire Counts flavored), but it's because I like painting skellingtons. So I slowly acquired via eBay a lot of little monopose plastic goblin archers, and scooped up discarded single orcs and nightgoblings, and especially fanatics and other weirdos. I prime things in the spring, and then I wait a couple of years to paint them, because I'm a professional and a dad and husband and who has time when I'm doing real life and like 15 different hobbies? In a fit of pique this weekend I sat down at the table and started base-coating a small army of goblins and nightgoblins from various eras of WFB. I kinda dig the late 80's to early 90's plastic ranges mostly because they are easy to put together and easy to paint, and the Citadel/Marauder lines because of the sculpts and the personality.

So, what do I got on the workbench? I was going to do an escalating "Border Princes" list that was flexible but depended upon acquiring more orcs and gobbos and capping it off with internecine struggles between the goblin shamans giving way to full leadership by a Black Ork and his Wyvern and underlings and man, these troops are hilariously undependable in small numbers (and I guess against elfs and dwarfs). Just on paper, I guess since I've not fielded any but I do have primed and mostly basecoated: 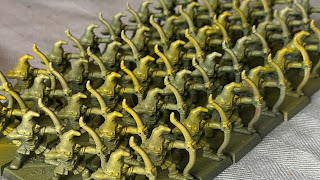 10 regular monopose Goblin spears - maybe for the Blood Pass set? I think they were the second edition filler troops from the boxed set?

5 fanatics of various stature and physiognomy, some plastic, some metal, one a conversion since his hands were missin'

47 (that's right, forty-seven) plastic monopose goblin archers - hilariously cheap and undependable in terms of the game, also (luckily) cheap in real life (like 80 cents a piece off of ebay). Sort of meditational to paint

I primed these all black with zenithal green to yellow to white highspot highlights - my intention was to thinly airbrush everything but my cheap airbrush is always in need of cleaning and maintenance, so I mostly use airbrush paints slathered on with a brush so it comes out real thin and patchy and you know what? I kinda like it. No-good, unreliable, cheap and good enough to pass the time. I will probably never field them and I don't often share finished minis unless I really like them, which is hardly ever. So, we'll see.

My plan is to get these done with some reikland flesh shade, or maybe reliable old floorpolish-and-black/green-ink and base them badly and crank out some movement trays. Then fill in the command gaps with resin-printed stuff, laser print or hand-paint some kooky orky/gobbo banners, and be done. 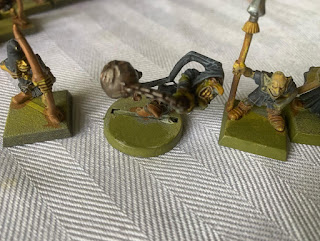 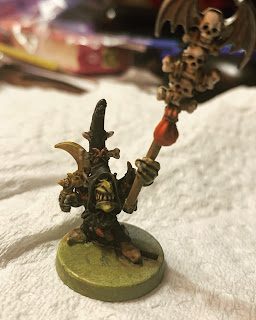 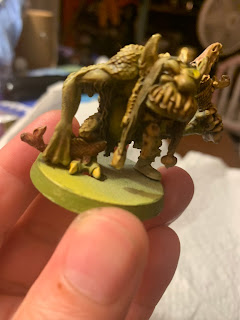 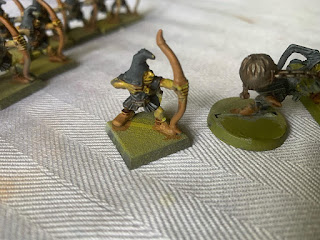 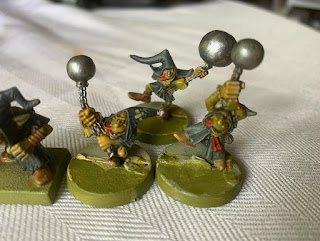 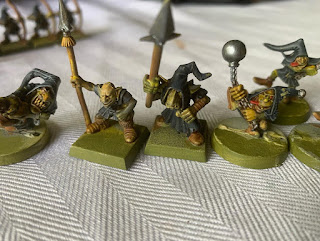 I've also got some goblin wolf-riders, an ork boar with rider legs (but no torso), a boar-chariot with crew, and some kitbashed squig-herds. That's about it. I have a secret dream to figure out the formula to get some marauder-proportioned orky and goblin weirdos into a posable format in Blender and crank out some custom resin troops in oldhammer style but this is cloud-talk at the moment (I could probably do it in an afternoon if I really put my mind to it but WORK! FAMILY! GUITAR! ugh). I could easily manage some Ork boss torsos for this boar and extend that to an oldhammer-inspired Wyvern rider - I just need time! time! give me time, precious

I did make a base pig-faced ork head .STL a while back just to make the unit-toffs/boyz have the appropriate lineage but I let that go by the wayside like all things I undertake. I tell you, generalization of hobbies is not the way to go. Better to be obsessive and focused.