Inspired by the Vircades project "Wage Slaves" series, and also the release of Cyber Sprawl Classics, I got my Tablesmith juju on and generated a couple of generators for low-level, OZ/AdventureTime/Neuromancer/Steampunk scumbags. +Dave Younce helped me to get a version of the name generator on Abulafia, but the rest is from my own noodle. The stats are DCC, but I think the modifiers must be from 5e or 4.5/PF and I will adjust those later once the code is more familiar to me.

Tablesmith is really handy!  Remind me to post the .tab files later. I twerked the Ork Tribes to make some Street Gangs, and made the names from code I stole/twerked from a Dickens name generator site, which made terrific but not odd enough names. The races are just a long list of races that spilled out of my brain. I figure Thrend (especially in Helleborine) is very  very metro-/cosmo-/pandimensionalpolitan and so hey man, werewolf plumbers with Dreamlands Robot journeyman assistants are probably par for the course. Relax, man. It's just a prank, man! For laughs! 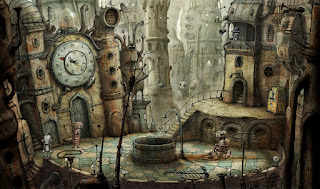