(reminded myself that I had an Evernote, and popped it open and found my fish-men solo adventure notes, as well as this, written in May 2015. Probably a way to tie Halthrag Keep and Space Dungeon to Black Powder Black Magic by +Eric Hoffman and +Carl Bussler  but I can't recall off the top of my head if it had been released, then)
Hyperidium is described in the scientific literature by Dr. Allan Whipplemark-Smythe of Future Earth 124/4b in the year QE2027. The entry from Encyclopaedia Galactica is abstracted, here.

On Aereth it is known in some places as Bale-Iron and Dweomer-Ore, and Green Orichalc by Alchemists. It has the curious and ominous property that it feeds on ambient magical energy and becomes more dense without decreasing in volume - depending upon conditions it adds mass from some other place and time but retains its shape and form.  It is especially common in Thrend, near the site of a meteor-fall that destroyed Halthrag Keep and turned the course of the Wizard Wars long ago (speculatively BE1078 +/- 7) 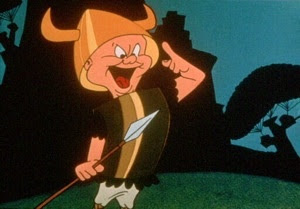 Any time an offensive spell is cast at a wielder of a Hyperidium weapon, attack and damage rolls (not Deed Dice!) are increased by +1d for the duration of the spell (which may allow, for instance only 1 attack in the case of instantaneous attacks).  The wielder may choose to give up this bonus to convert and dissipate the spell energy, whereupon the weapon gives off a baleful and sickly blue-green glow, and the spell result is decreased by one result category OR the wielder gains a Luck point until the next sunrise/resting period, which may take him or her above the natural maximum. In the case of instantaneous non-spell attacks, one attempted strike by the bearer will be affected.
For a wearer of Hyperiridium armor or the bearer of a shield, the effective armor bonus is increased by 1d6 each time an offensive spell is cast at the wearer, which stacks up to the maximum of 6 (so a single spell or multiple spells might drive the AC bonus to the maximum of 6).  In the case of instantaneous non-spell magical attacks, the next defended attack will be affected this way.  Unfortunately, it is difficult to hide or remain hidden as the armor's evil blue-green sheen radiates tell-tale light and marks it as magical.

Large quantities of this refined metal attracts succubi, wights, and Crystalline Arachnoidae who lust after it. It is refined from meteoric ore and the process requires strong acids; the ore from which it comes gives off a sinister blue-green glow. Much suspicion and bad folklore is attached to it in areas where it is found, and these creatures will always attack or target those who possess this metal (or even quantities of the raw ore) first.

(this was started back in the summer, maybe? trying to go back and finish off some lost trains of thought and so this represents some months of doodling and the chronology is weird)

I been thinking, see, and I have felt a real creative flag in terms of output of interesting gaming content.  I think it's the Roku I bought for 17 bucks at Staples - sapping my will away.  Maybe it's the return of Game of Thrones. (editor's note: this must have sat a while in the draft box)  I think G+ has taken a hard turn into commercialism and sharing of buyable shit that makes my skin crawl.  I'm not a hipster, but it used to be a lot of content was shared freely, and now it seems like it's behind the pay-wall, somehow.  I'm all about clue-ing people in to good stuff, and I like people to be reimbursed for their efforts but the G+ algorithm sends a great deal of kittie pictures, hot redheads, and Kickstarters my way.  Could be the purpose of it, maybe, but we somehow subverted it a little before if you take my meaning.  I'm sure that one book by that one guy is terrific, but I feel sort of like it's got some Hootie and The Blowfish Syndrome.  You play me, or try to sell me, the same goddam song on the radio every 5 minutes and you and me both get diminishing returns.  That being, you don't sell me that book (no matter how good it is), and I turn off the radio, Hootie.  You follow? Can you dig it, hepcat?

About the best thing I can manage of late is a mashup, and there've been no end of mashups for me this past few months.  I will put the peanut butter of DCC with any sort of chocolate, and so I've tried some Scooby-Doo/Space Dungeon mashup (it was good on paper), and this diesel-punk/Grease/Thundarr Mashup from a couple of weeks months ago.  I'm afraid as in matters of the bedroom, I have little staying power in the game room and lose interest quickly after the initial excitement wears off. Sorry if I don't have the creative stamina to keep it up for the long haul... The flipside is, at least I'm often satisfied by explosive bursts of fun/novel/interesting stuff but whether others are is for them to decide. We're all responsible, after all, for our own gaming enjoyment and to communicate to others what we might wish to have happen at the table.  Or else put up with it and be unhappy.

I'm thinking of some juvenile/troma high/mutant crawl classics thing.  Class of Nuke 'Em High/Return of the Living Dead thing.  There's this old scandalous RPG illustrated by Erol Otus called Alma Mater, I think I wrote about it some time ago on here. Seems dimly amusing but the genre's the thing for me and maybe not the mechanics so much.  I don't anticipate rolling interminable dice around a virtual table to simulate an experience I loathed 23 years ago!!! On the other hand, the archetypes of High School are endlessly appealing, and (there was a cartoon about this when I were a prepubescent lad called Galaxy High) I think it might benefit from some complication and transmogrification.  But the premise is sort of interesting, to me.  A befouled, Death Wish 2/Warriors/80 Blocks From Tiffany's urban metropolis full of Wasted Youths and (of course, it's me we're talking about, here) Deadly Unreliable Robots, Scrofulous Mutants, and Ionizing Radiation.  edit: played this game during the summer, before Our President Elect was much more than a hilarious unlikelihood, and I'd like to return to it but I have no wish to go to the Camps in my middle age.  Also, it seems to me that if I wait long enough, maybe a year or so, we'll either get a new President or Thundarr will come to pass at last...  Wouldn't it be hilarious if all these post-apocalyptic Zombie fantasies we see on the screens really were TRAINING SCENARIOS FOR LIFE IN THE THEOCRATIC PRISON ZONES?

Also, in terms of mashups, I proposed, and me and Doug K. and Michael S. toyed with a World Wide Wrestling/Space Dungeon mashup where the primary driver for the combination is to free myself and the other players from the constraints of physics, wrestling moves, and human anatomy and physiology.  I think it shows much promise for hilarity, since it takes all the drama and melodrama of professional wrestling and also the wacky tech, dark magic, and sinister corporate shenanigans of my home-grown toy DCC setting (maybe you can join it and read it on G+ but it's in Hypersleep mode for the time being).  WWW seems to me to be a terrific game, and all reports I have heard have been glowing (particularly from The Gauntlet podcast).  I look forward to pile-driving it into submission and I think I will probably do some gimmicks for it (classes) although the built-in ones seem to me to encompass a lot of room to flex... +Nathan Paoletta has a great deal of terrific games: (find them HERE).  I think I got into an early playtest version for WWW and I have thought about it a great deal, although I haven't played it straight, or run it myself, yet. I hadn't got much exposure to DW/PBtA when I stumbled on it, and it didn't make much sense, then. Now, I have more skills but it's a legit stretch to run it for me since it's not my usual genre/conventions/tone (hence my mashup!)

(hypocrisy noted) Also, I've gone through and invested in a couple of things - +Mike Evan's Kickstarter for Hubris delivered a final PDF product, which excites me very much.  Gets my juices flowing.  Since I drafted this post back in the Spring (gadzooks!) I also toyed with Beyond The Wall, which was maybe the most fun I've had gaming in a while - with a good group and some up-front bravery, you can have an amazing setting right from the start and the world-building and relationships go hand-in-hand. Lastly, I got +cecil howe 's very moody and evocative, and existentially chilly, add-on called "Do Not Let Us Die in The Dark Night of This Cold Winter". It's about trying to keep a quaint village from freezing and starving into non-existence, and since I cannot help to imagine what would happen if I combine this and that, I will probably try to build a village with some friends and BtW and THEN destroy it with winter.  On reflection, it bums me out but it could be fun to play with a heater on and some hot chocolate and warm socks. Segue into a weird world beyond the village, and in comes the Hubris thing, we're golden.  Some nefarious force is causing winter (not GoT, I know I know).  I had a good character last year in Pinkie, the synthetic-man Cleric of Santa, but I digress.

Anyways, thanks for watching.  You may have noticed I have not updated the DCC Class List for some time - my G+ associate +Stephen Murrish  is ably keeping better track lately than I am able or inclined to do. If you catch broken links, let me know and I may or may not update them (a problem is the blogger app for iOS is shelved and doesn't work anymore, which partially explains my low frequency of postings...)