The Hierarchy of Treasures in the DIY D&D world

Most Intersting and Valuable DIY RPG Works, in Order from Most-to-Least-Appealing to me YMMV of course
(this'n in the drafts folder since well before the end of Google Plus, I think the last one's a dig at Z - fuck you Z) 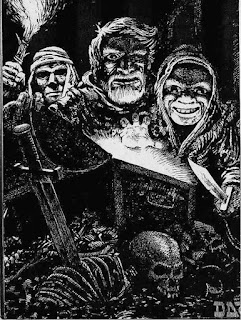 1) My kid made this. Here's a screen cap. I don't know what it is, but it's gameable. I tried to translate.

2) I'm a teen, just started playing RPGs. I made this. Here's a screen cap. or a blog post. IG or Tumblr

3) I can type in basic english, spanish, or french, and draw scribbly lines. I made this when I was 16 and found it in a box. Here's a screen cap. Bonus points for text-recognition that I can put in Google Translate

4) I've been writing as a hobbyist since 5e came out. I love it! C&C please. I've got a rudimentary understanding of how to turn a Word Doc into a PDF (bonus points if you are under-represented and/or your avatar suggests trans- or cis- female. NOW NOW NOW don't get bent out of shape, middleclass whitedude, or whatever get bent i don't care)

5) I've been playing d&d for 45 years and I hate new stuff. I made this. Dont presume to tell me what is good about it or not. (insert most of my hobby writing here). I figured out InDesign and know what a widow and an orphan is.

6) I have a small time publishing thing, I put out a lot of gameable stuff. I've made 3 succesful kikstarters. Here's my latest one.

7) I'm a writer. I play d&d as a hobby. This is the arc of my campaign based on a novel I'm writing.

8) I read a lot of Grant Morrison while stoned. Here is my concept album in the format of a D&D module. I'm going to Kickstart it next year.

A) Fuck White Nationalism, National Socialism, and that ACKS guy. Also, Zak.. Fuck Zak. But that's not the kind of PC manifesto I mean. Provacateurism seems de rigeur these days, though, so let's get some eyes on this thing and make some cold hard ca$hes. How do you monetize a blog, again? Conflict? Great. I'm on it.

B) I want lots of variety in my PCs. I don't mean like "THIS HALFLING 3/3/3 Bard/Sorceror/Barbarian can dual-wield with Power-Hammers and has 12,000 Psi-Points with all metasciences, and is half-tiefling on his mom's side". I guess if that's the way your game goes, then that's cool but not my cup of T. Variety in PCs does not necessarily mean like 1000 different classes to choose from. They all tend to look like handsome anime types once I get the sheets in my hands. Like: sexy brooding thief. Sexy brooding swordsman. Sexy brooding wizard. This is not what I want. I want like the Wizard of Oz team. I want a telepathic dog, a robot brain in a spindly mechaunit, a migo technician, and a beleaguered time traveller. Shit - you don't need classes for all that. Maybe some HP and saving throws.

I fell in love with Into the Odd a few years ago when it came out, and it goes a long way to making terrific PCs who are not fleshed out in the least, except with the most rudimentary strokes. The magic is that it happens WHEN THEY PLAY. Your sombrero and great axe and sassy parrot do more than feats, specializations, skills, perks, flaws, any of that GURPS metagaming shit can do. I see an awful lot of "BUILDS" and you know what? Save builds for Dark Souls and then it's easier for me to mercilessly slaughter your character in session 2 - because (as in ItO) you toss dice three times and you're off again. Being from the old days I don't give a fig for your snowflake builds, bro, and no guarantee that your PC will live. The DCC funnel has been freeing in this sense. The only way to stay alive is to make a memorable character that you play well at the table and Tiamat can come for us all

They say the OSR is an undead thing. It's true. They do say it. Tainted by racism, sexism, barbarity, elitism. I'm thinking of doing 5e but in the manner of Old Skewl early next year at a local convention. Trying to coordinate it with friendly similar-minded DM's so as to infiltrate the tedious land of 5e organized play. I don't know how well my philosophy and/or lack of tact will play out or be received, and the organizer of the thing (a casual friend from the club I frequent) has a great deal of stuff on his plate. (post script: I did do it, and the 5e Basic Rules make for a decent old school 'feel' if you polish it up with moldvay, but that could be said of any rules set)

C) I don't give a fig for your backstory. Seriously. take it and cram it

D) PCs ought to accrue scars, changes, and storyhooks as they play. I guess this is C, part 2. A great thing about DCC is the corruptions table that steadily turns your humanish Wizard into a slithering pile of eyes and urges. That's like, Magic, Man. Lost eyes and hands lead to bionics and Vecna-pieces and so there.

E) Spend dat money. Carouse carouse carouse (and be pious and do research) You're not chasing paper in the bowels of the Oerth for no reason! Carousing leads to hilarity and the relative poverty of PCs. Also, if you're spending loot and selling Magic items, then those cultists at the local Cthulhu temple are going to get powerful As F*dge, and the Omniqueen wants her taxes, subhumans!

F) I seriously don't give a fuck about your backstory, dude. Almost always dudes. We're here to make backstory via the hilarious, spooky, exhilarating process of making a session and then promptftly forgetting those sessions and then recalling, later, those sessions which is, uh, the backstory

G) I mean, yeah, your game is your game but I am never ever ever looking to incorporate your backstory into the game. That;s on you. I prompt players ALL THE DAM TIME to give me juicy morsels of worldbuilding since I am lazy and this is a better way to invest investment into the game than some sad sack Conan/Edward Scissorhands/Blade the Vampire concoction you've got going on

H) there needs to be mutants, robots, secret robots, synthmen, psionicists, elves (but not Tolkien elves unless we are counting the Rankin Bass Mirkwood kind), sigh I guess Dwarfs too, fuck it no hobbits sorry James, Red Martians, Tharks, whatever. The more the merrier. I guess I'da gotten into Talislanta if it weren't for all the half-dressed weirdos, but like, all the PCs in my groups are half-dressed weirdos anyways. Even the humans ought to have some weirdness about them. Extra digits, antennae, quirks, mutations, whatever. All rolled pseudorandomly. Like, if I could get a chart equivalent to the Arduin Grimoires (uhh, note, I have this chart) weirdo character traits, or like the PC equivalent of DCC's spell quirks, then we wouldn't need Elves, or (blech) Hobbits. Everybody'd want to be a undisclosed Star Trek style humanoid with blue skin and retractable arm-membranes and bionic eyes

I) I don't know why but Tieflings and Dragonborn really burn my cheese, since they happen to be the lamest, most accepted weirdos at the table these days. Also, I grind my teeth at Half Elves since that's some bullshit. It's a tiefling. A tiefling is literally a half-elf. I don't give a fig about the origin story of your mom or dad or whatever. It's all halfelves all the way down

J) If you can pull in an Unearthed Arcana mockup or (gods forbid!) a 3rd party or homebrew murderhobo class, do it. I probably won't even read it. I hope you're not slipping a build in there or trying to rules-lawyer me

K) there's like 27million gods, like in Anomolous Subsurface Environment. Fuck it, make it up, I don't care. Apollo? Great. Zargon? Awesome! Zardoz! More awesomer. Some twenty-handed aspect of Kalima, or Faceless Patron of Orphans! WHOOOOHOOO now we are talking. Be a priest of a whole pantheon, IDGAF. I think DnD focused too early on on some jealous Monotheism. Fuck it, have 9 patrons and 27 different conflicting goals going on. That's on you - just remind me to drop the negative consequences on you when you let 8 of them down

L) magic is hard to come by at the beginning, but AFTER THAT, it represents ways for the universe to incur chaos/kaos and randomness on your ass, and then you'll find that opportunities to mutate yourself, or curse your line down to 7 generations, well, you'll find they are ubiquitous since Those Who Wait And Watch At The Threshold are going to try to make doors in to hasten The End of All Things