Bear with me I'm testing out the voice recognition app. On my run today I developed further a couple of ideas I had while I was falling asleep last night.  Had a bit of a fugue while I was jotting down the various encounters from the FF book Forest of Doom (for my next brief project). No pictures - too lazy.
1. Gigolo or houseguest elf who comes to the houses of lonely wives and widows and eats all the food and sires children.  He is magically able to be to most houses in the realm on any given night, but always leaves when the meal is eaten or when other pleasures are complete.  He always swears his mistresses to secrecy, as a matter of course, and if the secret is out, then he stops visiting forever, whatever happens. According to Elf Law the fathers of half elves are entitled to their children's treasure when the children die and so by siring as many children as possible and pushing them into the dangerous adventurer's career he is wealthy beyond his wildest imaginings. He's actually an agent of the Elf King that disrupts human politics and economies.  The Elf Kingdoms won't hesitate to press legitimate ( under their law) legal claims and try them interminably in court or else resort to boots on the ground interventions.  All half-elves in this region all have cuckold's horns to start, so as to clear up whose children are whose - the human cuckold's horns are only metaphorical/figurative.
Listen to I Can't Get Enough by The Dead Brothers on @AppleMusic.
https://itun.es/us/lNXzq?i=275192272
Second – and I may have regurgitated this one – mummy dust junkies ( I'm actually impressed with the way this app recognizes my voice ). You see long-ago the nobility wrapped their dead in muslin infused with lotus resin, opium gums and various psychoactive alkaloid preservatives.  The full gamut of colors of lotus were represented and the alchemy that obtained from the mummification process is powerful. The fermentation of the remains of the dead (many of whom dabbled in the Black Sorcery of Stygia and The Aegypts) infuses the wrappings and corpses with subtle spiritual vibrations.  Any who consume (smoke/eat/inject/tea/snort) the ground powder of mummies from this region become subject to various random effects of the compounds within, and further are subject to brief hauntings by random NPC ghosts. I don't see fit to make a little chart. There's a lot of those. The rule is the reaction must be determined randomly ( in the negative direction preferably) l with every interaction/use, per batch.  Exempla gratia if you have 5 packets of green lotus-and-scorpion-venom-infused mummy powder, and make a tea, you will meet the spirit of the noble whose corpse this was.  he or she may be angered at being ripped from the netherworld to answer your questions and these Aegyptians were spiteful and jealous and entitled, mostly.  Addiction ought to be a foregone conclusion, although it ought to spur some locales and spells and treasure, also.  It is possible to distill the active alchemical ingredients from the powder with a more pure process, but most Powder Heads don't bother to take the time. If a more refined process is used (chemistry/alchemy check) then what you get is much more potent and brief acting but the negative side effects are also much more long lasting and the ghost will remember who you are. Eventually, the Powder Heads become mumbling, confused, twitchy wrecks, literally haunted by long-dead spirits of powerful wealthy people (who know how to possess weak-willed subjects). My memory is spotty in terms of #Narcosa and all that stuff, and I may have stolen this'ns unwittingly but without malice. If it's really your idea and I stole it, I apologize
thanks, neighborhood opiate injectors, for this bit of inspiration while I was running from Zombies today after work.
A game of Appalachian Knocker-Mines tonight, and then post the Schweig's Dungeon Tool of this Forest of Doom thing maybe tomorrow
Posted by Noah S. No comments:

Lord Gort and the Outcasts : Lost Metal from the Mists of Time

I was cruising through the annarchive.com Dragon Magazine archive one day recently.  Let me tell you, 1) it's interesting to see some of those issues 2) in retrospect I find much of it laughably corny, 3) the April and October issues remain my steadfast favorites.  I must have had a good sprinkling from #80 to about #140 or so, right about the time our group's interest in 2nd edition started to peter out, and they got in on the Vampire: The Masquerade thing.  I don't know I don't hold a grudge or anything.  I can't remember a damn thing about the system other than the Gangrels...

Anyhoo, this might probably better be put up on my wargaming blog but it has more to do with games in my own personal golden era, back in the murky formative yearsof my yute.  I distinctly remember slobbering almost continuously over Imperial Space (with the deadly Space Pope - heard it's a vapor game...) and Villains and Vigilantes.  And I probably appreciate Gamma World and Star Frontiers much better now than I ever did then.  And I find I hate Snarfquest and Wormy in an abject way.  Maybe 'cause of nostalgia and that I never saw the ends of them.  I only just the other day recalled the 1st edition of Ghostbusters and 2nd edition of Paranoia, both of which I owned and maybe played one time (nobody at 13 could be a capable DM, just saying)

There's this.  This group of little distorted lead and tin bullets likely distorted my thinking about games and this hobby in a way that I wasn't aware of until I saw the full page spread (which I cannot find again, but here's the RAFM 1987 Catalog Page): 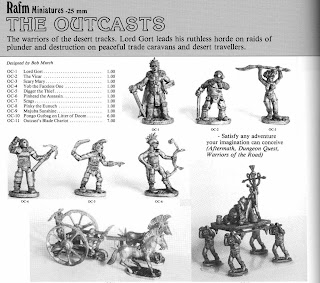 You see here: Pongo Gutbag (on litter), Lord Gort, The Vicar, Majuba Sunshine (not pictured), Scary Mary, Yob the Faceless One, Digger the Thief, Pinhead the Assassin, Scags (I think Scags had a spear IIRC)... Pinky the Eunuch is not pictured, either.

I was already focused on may of the Ral Partha and RAFM minis, and when the early Citadel stuff came around - especially the Chaos and Elves of the late-80's, I was hooked.  I had Gamma World 1, by this point, and also Star Frontiers, and also had tried to suss out CoC (too early).  I was 11 when these ads hit in 1986, and I think I had seen The Road Warrior about 17 times.  These particular figs, turns out they were sculpted by Bob Murch and may account for why I still collect these ridiculous hunks of metal and plastic today.

In particular, I love The Vicar, Digger, Yob, and Lord Gort himself.  Strangely, you can get some of these from Noble Knight and so I just got somewhat poorer by a small margin in the pocket-book.

I don't know the story behind any of these personalities but at 11, my brain feverishly attempted, and failed mostly, to think about what kind of fantastic lives they lead.

With nigh on 30 years of experience behind me, I can vouch that the reason they are The Outcasts is because they are louts, and have mental mutations of the worst sort, and would kill you and your party for a nickel or a copper piece or a cap or a half-a-cred, or a nice pair of boots.

They don't seem any less cool for all that, though.

Maybe I try to hunt up the official story for these figs (doubtful one exists), but if I don't find anything then maybe I will stat 'em up in DCC or CUaBM/Crawljammer/MCC terms.  I imagine that my Purple Planet thing will need a burst of twitching life by the time MCC drops, so it could be good.

Anyways, cruise through the annarchive thing and see what your childhood hath wrought.

A trip to Joanne's Fabrics and Crafts on my lunch break yesterday yielded some nicely shard-y acrylic chunks. I need some green ink to wash them with but I may try a Phtalho Green glaze just for a kick
The next photos show idea-worthy things 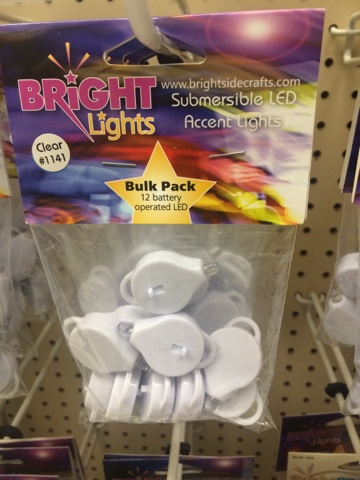 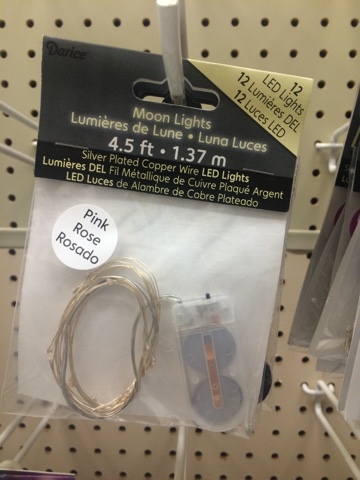 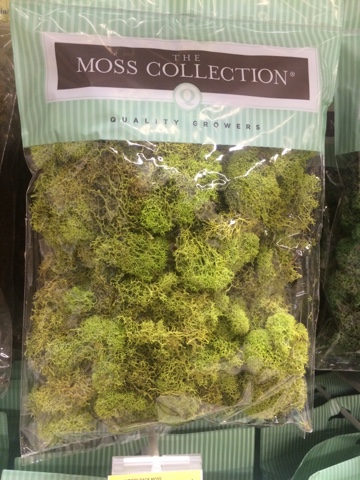 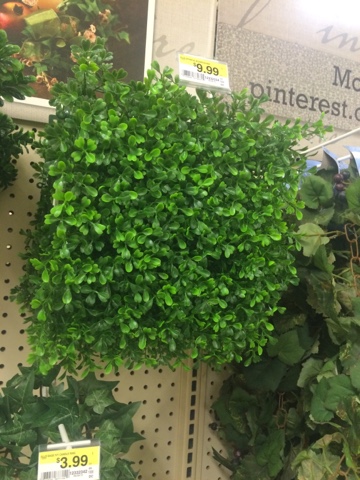 Also some wooden disks for the bases, and some press mold-making putty. Interestingly this stuff needs to be oven-cured but I figured better to start small and trial/error than to invest 55 dollars in a 2-part silicon based kit and waste a bunch of dough on learning the process
I will post some results soon - going to cast some cobblestone and brick press-molds for basing figs down the road. My mom gives my kid these interesting path things for fairy gardens and they have some great sculpted brick and cobblestone surfaces so I'm going to rip 'em for the archive 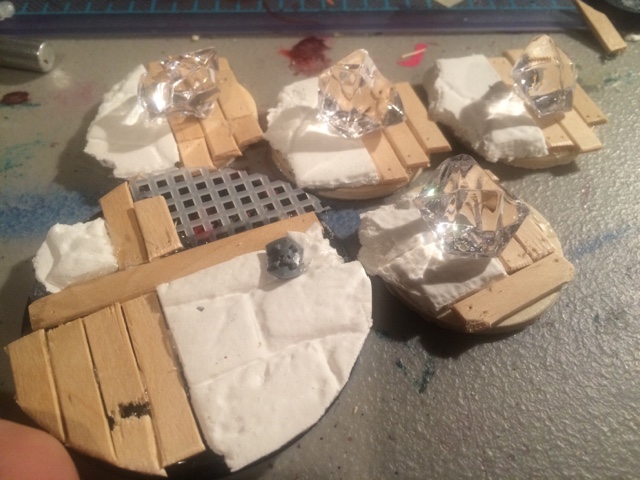 Anyway, let you know how it goes.
Posted by Noah S. No comments: