I added some non-repeat indicators for certain sections of my Dungeon Maker code - so there ought to be more unique encounters within the dungeons - not monsters/NPCs because repeats of those give rise to factions - but fewer repetitive traps and trappings. Here's a 30 room, 1st level dungeon for you:

TOMB OF THE TOMBAC TOE RING

p.s. subtypes I put in to vary up the monsters and keep players on their toes, just kind of templates added on to normal monsters. Some are kind of fun like "shadow" and "nega-" and "space" but anyeways
p.s.s. the code makes lots of stuff to play with, even though it's not always sensible, with the idea being that human interventions and edits will turn weird and unplayable entries into something fun at the table
Acidic space lily pads? I simultaneously want to jump on/vaporize these
Posted by Noah S. No comments:

Crossin' the Streams - DnD plus Sims 4

So I was bored, what with this pandemic, and incidentally a client I work with was tellin' me about The Sims 4. I'd played all the Sims games but never really got into them. I have a copy of Sims 2 downstairs, and a fantasy Sims thing for my kid for this cast-off Nintendo DSi. The whole thing never really appealed to me for very long, so it's not something I've ever been too... enthusiastic about. But, it just so happened that when I went to the link that the client was talking about on Steam, there happened to be a Halloween sale on, and so I picked up the base game and a Potter-esque wizarding thing, a Vampire thing, a "Fear and Loathing in Space Desert Retro Alien Invasion" thing, and a halloween party pack, and some other stuff for pretty cheap. SO. That's done. My kid wanted the cats and dogs one, so I got that too. There's also an official licensed Star Wars pack, which offers lightsabers and "comfortably-used" architecture and alien races n such.

The interesting thing about it is, that the EA people put out regular mod packs for $$$, which is great - I have my eye on the camping one, the Aztec/Inca/Maya/Mesoamerica jungle one, and my kid has asked for the mermaid one. They have a pretty good model, these EA guys - they build the framework and they offer high-quality expansions, and they look the other way when people hack the heck out of it.

Reminds me of WoTC - I don't know if there's an equivalent of Old School Sims, or whatever. But in the interim, I picked up a "Zombie Apocalypse" mod wth Resident Evil characters (including the Nemesis!). There is, interestingly, a Sims Medieval pack/mod/total makeover for what appears to be the Sims 3 engine. I wonder if people are diligently stealing content from that, or if it could be done? That one has pirates, knights, castles, swordfights, all the good stuff.

Also, I figured out how to use a community-friendly program to add a t-shirt skin of my favorite, now sadly-defunct podcast Drink Spin Run. It happens to be the most comfortable T-shirt I own for some reason, and it leaps magically into my hands from the clean laundry bin. I accidentally happen to be wearing it as I type this.

So, here are some links to DnD-style mods and hacks for The Sims 4. If I ever make more scripts or content for this particular game, I'll share it around as best as I am able - probably from this particular page.

I saved Strangerville from the >>REDACTED<< and also now I'm working up to Master of Magic whilst I pursue a day-to-day job as superspy. So, that's cool, I guess.

HERE IS SIMS 4 STUFF I'VE MADE:

You, too, can celebrate the greatest Roleplaying podcast in all of recorded history by dressing your digital avatars in very comfortable T-shirts when you battle friendly wizards. 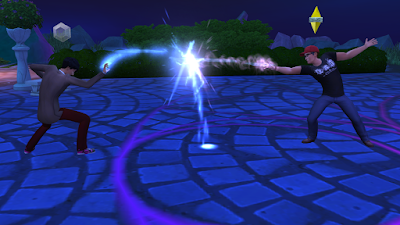 HERE ARE POSSIBLY-USEFUL LINKS FOR World-Famous-Fantasy-Roleplaying-Game LOVERS OF THE SIMS 4:

Some skyrim textures (I ought to play that game one day)

Very promising set of props for having a table full of DnD stuff at your house.

Add DnD Races as traits to your Sims by Emoria

A big fancy castle using only the base game

A Couple of Random Wampus Witches 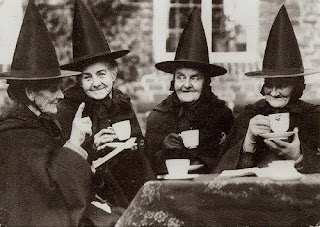 Like you, I dig Halloween and it's here. Or pretty durn close (Edit: i forgot about this until mid-November - so sorry!!). So my esteemed friend Erik (twitter handle : @daydreamtiger1 ) over at Wampus Country has forwarded to me and other Kickstarter backers of his Lumberlands project a fun little October-taster partly distilled from some previous WC posts (I dig the sucromancer and lore behind it and refuse to acknowledge whether I bumped into candy-races whilst thinking of Thrend). Amongst the other amazing things it contains, you jealous reprobate, is a "Random Witch Generator" and if you are anything like me, which is established (see above) that's just the sort of thing you need at this time of year. I was thinking about doing a "Witch March" where you plod along to the west, conflicting and conquering The Myriad Witches of Thrend, the kicker being that once they are all disposed of you find they are the only thing keeping off THE REAL BADGUY who is of course a douchebag CyberLich or sommat. Fight the patriarchy yinz.

These days, I'm often kept awake by the screeching and to-and-froing of the witches in my county, so I don't have a great deal of processing power left in my brain to handle my witch-based needs unless I eat an unhealth-ier amount of candy than I do and my dentist has forbidden such and so I used Erik's wondrous document and my trusty dice/computer to cook up a couple of startling witches on the fly, totally at random. I could probably manage a Tablesmith thing but we'll see. You ready? I'm ready! Handfuls of dice (as you are wont) (postscript, I actually did finish the Tablesmith generator and here is 5 Wampus Witches for yinz).

post-Postscriptum: Erik conveyed to me that a goodman hath entered his works into Abulafia, wherein the entry you will need is missing because Abulafia is currently plagued by PHP issues. I wish I could help you, Dave Y.!

Again: here is the Tablesmith .tab file for yinz what have it