The Land of Nine Lives - Also, a Challenge To You 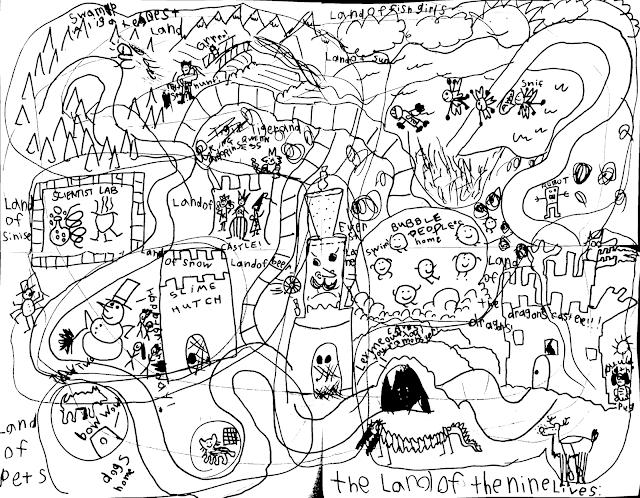 We were a little bored. So She wanted to make a game for me to take to The Club (properly, The Historic Haven). She wanted me to give it to them. She called it Warhammer 3, but after I wrote all the rules down it seemed more like a sneaky game of tag, which is fine. I transcribed it all with an orange colored pencil.

But then she started dictating the characters, where it got to be WEIRD and FUN and O MAI

Fish people, Hunters, The Scientist, A Giant Beer Bottle Castle With a Mustache with Little Beer Bottle People. There is a hypnotizist monster with an accordion, but in the drawing it comes across as an alligator-like thing. It lives in a cave and it has red eyes so you know JUST KNOW that it's evil. I'm not making any of this up - it's from her. I embellished my end with some Bubble People (untrustworthy!) and a Robot (crazy!) and trolls, of course.

I can see the influence of Stardew Valley (She's smitten with it) and also Pokemon and some other things. We got a whole set of the main Sailor Scouts and the two cats after I purchased her like 20 little vinyl chibis ... please not that sailor Pluto and Uranus don't count because we haven't made it that far (come to think of it we haven't yet met Sailor Jupiter or Venus in the series, yet!)

How do you play this game? Interestingly, kids do this sort of stuff all the time. I did it. You probably did it, too. You don't need rules, but what we did was we got my lap-board for drawing on, and we taped together ("on the inseams") four sheets of blank white copy paper. Then we made a list of the people we thought should be in it. and then we marked off for each of them a little territory, and some (like the Tiger Girl) live with the others (The Tiger Girl lives with the Princess, King, and Queen). Then you doodle whatever you want in there, and you let your kid doodle too, or direct your doodling, or however they want. Then you put little tags on stuff.

I'm off to get a big pad of paper.

Here's the challenge: I want you to do this, too. I want you to make a setting with a kid. Your kid, a relative, whatever. Make a settting for a RPG game, and share it. Let the kid do most of the thinking. You just help. If you're a kid, you get bonus points.