I don't know if this has been batted back-n-forth, but I was thinkin' about the stuff that Gary and the boys n girls mighta been readin' back in the day and the influence of sci-fi and sci-fantasy and pop culture on the nascent DnD. How do I incorporate the weird world, thinning barriers, and dream influence more fully into my creative process?

Anywho, amongst other things that crossed into my threshold of awareness was a book called A Treasury of Witchcraft by Mr. Harry Wedeck who appears to have been a right-polymath in the classical sense. I'm surprised I havent come acrostik before. I would bet that some of the thaumaturgy/goetic magic diagrams and such that appear in the 1e DMG were prolly lifted right from this book, but I haven't unwrapped it yet from its mailer. The reason is because I gave in to a impulse buy sort of synchronistically since at the time I was thinking about this issue (prompted by another book buy) I was also listening to a podcast about sinister forces afoot in NJ who mayen't/mayve killed a young girl in a magickal sacrifice (or possibly accidentally? is my hunch)... [see, for more information, the murder of Jeanette De Palma in 1972 in Springfield, NJ and the weird circumstances that surrounded it) Try these: Double Date with Death, Death on The Devil's Teeth 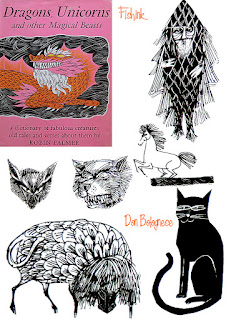 Also, got a one called Dragons, Unicorns, And Other Magical Beasts by Palmer and Bolognese which I had as a boy but sadly absconded with it from the library - my right-hearted grandma Anne probably had to pay the overdue/replacement fee to Miami Springs Public Library but this one had such great linotype/woodcut art and had such terrifying images that I could not bear to part with it on purpose, although between then and now (something like 35 years or more?) I lost my physical copy but not the image of the Barghest which it contains...

Reading/read: Steven Newton and crew's Creep, Skrag, Creep! for DCC which is a sound funnel almost like the movie Alien in its horrific simplicity and ably done. I think it's a little light in terms of what it gives you for most modern sensibilities (so many unaddressed questions!) but it's not a bug for me, that's a feature

Inquiring into: Jacques Vallee, Liminal Earth, and Frederick Barbarossa (this link is a psyke-out!)
Posted by Noah S. No comments:

On the 6th hour of the 6th day of the New Year, in the Principality of Brine, in the salt-scraping ramshackle village known as Endtown, our lowly townies played admirably by the DunjonCorp team sat. They sat and drank and lamented about the poor financial prospects. IF ONLY they concurred, IF ONLY THIS PLACE WAS NOT SO BORING

IF ONLY I HAD NO SALT IN MY NOSE

IF ONLY MY BLOOD PRESSURE WERE NOT SO HIGH

IF ONLY I COULD PAY OFF THESE EXORBITANT LOANS

Ahh, but what good is wishing into a tankard of ale-brine? is what my dear grandmother always told me as she drank her ale-brine

...and as if in answer to their innermost and verbalized prayers, Jojen the Cantankerous, a minor noble from distant Threshhold and a budding sorcerer offered the every patron of the bar the princely sum of let us say 5 GP a week to accompany him and his handlers (Chivas and Gorp) to Highfell in the mountains to the north, there to loot and explore in the name of civilization and commerce and magistotheurgetical science

And so they departed, aglow with the prospects of new livelihood but as soon as they stepped a-blinking into the sunny late afternoon there was a clap of thunder and a distant mushroom cloud and THERE! above the Great Salt Reach a spinning, wobbly, not-at-all plummeting chunk of Highfell has saved them the trouble of commuting by hanging there mysteriously in the air, lit from within and without by strange energies, shimmering hazily, defying reason and good sense

There she hangs and Jojen and his crew stood aplomb in wonder, mostly dumbstruck

There’pon with a giant CRACK! a chunk of the (mountain?castle?dungeon?) separated from the grander piece and DID to Endtown’s dismay begin a lazy descent to Aereth. On a trajectory with the very Mayor's crummy house from which the party observed the phenomena! At this point, a flock of Luftbaboons peeled away from the battle and made its way to the town and harassed the party who took some losses, of course, but nothing unsettling (it was Keith whose PC's died owing to random chance and it seems suspicious that maybe I do not like his PCs but such is not the case)

The party barked orders to the Mayor - evacuate the townspeople! And so it went - some calculations and they determined that 3 or 4 hours until touchdown and probably destruction of the town. A few hardy souls and the Salt Mercantile Guild guards stayed behind to assist with maintaining order.

The trusty spyglass revealed that a smallish battle between some cloaked figures was afoot on the parapets and crenellations - and ominously large parts of the ruin tumbled to the earth below (ripe for looting!). Enacting a foolish plan, the party and some carpenters felled some trees and lashed them together to make a climbable pole to reach ALMOST to the height of the bottom of the floating chunk. The party stopped on the way to sift the wreckage below and some spurious artifacts (a catsuit made of spider silk, a painting of a clown on black velvet, and something else which my mind does not recall)

The conniving rutabega farmer (Ashley's) latched on to the wires and ducts jutting from below and so the party climbed up, reduced by half owing to falls - Boris the soldier (Eli's!) was lost as was his gear. Even the rutabega farmer fell heroically and embedded herself forever into the salt flats.

They managed to alight on what I now name Cattohnus' Chunk, since it were determined that the tower nearby was his/hers/its, and also they looted an ancient statue of Arcantyl's female aspect of its fist-sized rubies for eyes. Keith has a thing for playing femmes fatales with quick fingers and avarice,. The rest of the party took cover from acid rain - this time weak enough but who knows, with all this purple lightning around, what might happen?

Knocking on the Wizard Cattohnus' door, they were greeted by a stone man more than 20 feet tall, and the muscular scribe (Keith's PC) left a calling brick, which presumed to describe their appointment. But there was some wait - an extradimensional one, at that, and during the wait a flock of Luftbaboons alighted around the party and harassed them, the biggest one even counting coup on the scribe who deftly boxed the winged mandrill's ears much to the amazement of the creatures who responded better to the violence than any gesture of friendship.

Bortak the Lieutenant Luftbaboon explained they were somewhat unnerved by the sudden disappearance and reappearance of their territory high in the sky and offered to take the party back to the ground... No sooner said than done and we approached the wrapping-up point...

Selling their loot, the party (6 zero-level humies) have accumulated enough XP for first level which is to say 250+100 after shares allotted. A tenuous relationship with a small band of flying primates, and it seems to the inhabitants of their grotty little agri-salt village that the party are heroes

Cattohnus' Chunk, instead of hurtling to the Aereth and smashing up Endtown, settled very gently and now only perpetually THREATENS to obliviate Endtown. Who knows, aside from a big stone butler, what horrors live within it? And what has escaped onto the ground to threaten the countryside?

TUNE IN TO WATCH
Posted by Noah S. No comments: