The (Previously Untold and Spoilery) Story of Halthrag Keep


I wrote this some time ago as a way to keep the solo gamebook's rudimentary plot somewhat meaningful and sensible.  I point out that it was written before the glowing green stones of the Purple Planet were in my mind; must have been some in-community synchronicity happening or something.  I give it to you now, all word dumped and vomited, since I found it in my hard drive.  I had written it to include in a standard DCC-playable multiplayer module, but if you're reading this, and you've read that, then you may have surmised something quite like it already. The next project calls, and I do not believe I will return to this forlorn place anytime soon, and so here it is for a few minutes' diversion.  It's how I mix scifi and fantasy tropes into a thing that is more fun, and since DCC is permissive this way that's why I like it. This may represent the most cohesive world building I ever did and you get a glimpse here of Thrend, which has always hung there for exploring behind my eyeballs just in front of my imagination zone.

A few hundred years ago, a pair of wizards fought a ceaseless series of battles over honor, or spellbooks, or the musty inner workings of the Mage’s Guild Ball.  A minor offense was given and for this legions of men and women and hosts of man-like creatures died and were forgotten.  Halthrag was one, a petty a vainglorious servant of Sezrekan whose reach often exceeded his grasp.  During the last great battle between these blustering sorcerers (the other Wizard’s name and story are now long forgotten), the lesser known of them had nearly won all – he had not only marshaled legions of lizardmen and uruks, but had won over trow and a towering Cyclops to his cause, Avrogamt by name.  This nigh-unstoppable monster had decimated the Threndian kingdom from North to South with his great stone and pyronite club before he marched upon Halthrag’s Keep.  Stalwart though they were, Halthrag’s guardsmen were losing quite badly and were nearly beaten already when a flock of barrow harpies crashed into the wizard’s tower, splitting it wide and delivering the astral form of Halthrag’s nemesis by way of a flickering obsidian orb.

All at once, Halthrag was killed and his soul sent into the inky blackness of the Forbidden Zone, Avrogamt laid waste to the guard, and the captain of the guard Malkenruth despaired.  Knowing that they would all soon perish without supernatural aid (which they no longer possessed now that their lord was gone), Malkenruth beseeched the golden idol that the men and women of the guard worshipped from their distant homeland.  Unexpectedly, his prayer was heard.  The idol’s master – a powerful Old One in its own right – diverted a passing cargo spaceship with telluric and magnetic forces, crashing the thing in a fiery blue streak that rocked the whole Peninsula of K.

The immediate result was that the top of the High Tower that contained the body of Halthrag and his gloating and astrally-traveling nemesis was obliterated.  A vorpally-polarized hole opened in reality that cracked the obsidian orb and Halthrag’s enemy fled to the ethereal, now disconnected and untethered from his body.  Coincidentally, Avrogamt was knocked to his knees and quickly dispatched by the remaining human guardsmen.  The lizardkind and uruk troops of Halthrag’s enemy were blinded, shaken, and broken.  Malkenruth and his brethren let out a great cry!  The tide was turned!  But their victory was shallow and short-lived, for the cargo of the small ship that destroyed the tower was scattered about the keep and the surrounding lands.  Malkenruth and his peers sickened immediately, and the great swaths of forest around the keep blanched and grew surly.  The river that flowed beneath the keep swallowed a great deal of the twinkling poison from debris that littered the cliffside, and the story tainted the folklore of the Threndian people for generations.  All children were taught to avoid the glittering blue rocks that sometimes turned up in spadefuls of dirt or at the bottoms of squig-holes.

A millennia, an aeon, an age later.  Halthrag Keep lies nearby to the lantern-jawed minor city of Marbourg.  The blasted forests and fields nearby have mostly recovered and farmlands rarely yield sickened crops or mutated livestock.  Some curious apprentice sorcerer takes it upon herself to enter into the long-avoided keep of the dead wizard Halthrag, taking with her a malicious imp named Spellvexit – her familiar spirit.  He is her companion but lusts after her soul, and he smiles and plots against her.  Inadvertently, she awakens the pilot of the diverted craft who (until now) has lain dormant in the wreckage of its otherworldly ship in a hibernation capsule at the bottom of a crater in the eastern yard of the keep.  Her body is annihilated and the pilot sets out to return to the heavens to complete its original mission, the details of which are not important.  But it needs the glittering, glowing blue rocks that tumbled all over the Keep and the surrounding countryside to power its gravitic reactors in order to escape Aereth’s atmosphere.  So it sets the life support systems of the ship and the flying quad-rotor drones inside to find the glowing blue Space Rocks it needs.  The drones and the pilot can sense the life forces that ebb and flow around the keep, and more powerful life forces are usually set upon immediately and turned into servitors to collect the fuel and bits of metal the pilot needs to repair the ship and embark.  It can sense Marbourg, but the limited range of the drones and the state of the corpses in the keep limit the range of its operations. Further, the Xenon-poor atmosphere of Aereth saps the pilot of strength, even though Aereth’s gravity is somewhat less than that of its home planetoid.

Coincidentally, the Arm of Vendel Re’Yune – disembodied sorcerer – has settled upon the High Tower of Halthrag’s Keep in a dimensionally parallel (but proximate) causality.  At night, at this time of year, the resounding temporal echo of the blast that destroyed the obsidian sphere nearby to the portal to the Forbidden Zone allows Vendel Re’Yune to manifest in an extra-dimensional space where the High Tower once existed.  He senses that the technology the spacecraft pilot uses could unlock him from his inter-reality torture.  In dreams, he has contacted the repugnant leader of a troop of were-creature bandits that stalk this area – the Jackals – and implanted the need to find the glowing blue rocks within and around the keep.  Re’Yune hopes to use the rocks as leverage to bargain for technological aid from the pilot, or to somehow overpower it and bend its craft to his will.  It may be that the gravitic reactors can reverse the molecular and quantum entanglement that keeps him alive and entombed.  The drones of the pilot sense their intrusions and do everything they can to turn the Jackals back, including animating corpses to attack the bandits when possible and striking them with ion beams as a last resort.

The pilot merely wants to return to space, and has no understanding of the primitive morality or motivations that guides the carbon-based life on Aereth.

Further, unknown to either faction, a vicious Manticore has taken up residence within the dungeon of the Eastern Gatehouse; a tunnel into the north cliff face opened up after the spacecraft was dug out by the reanimated corpses the pilot roused.  The Manticore is ill and reeling from an encounter with a sorcerer to the south (near Helleborine), one who opened up the heavens and blasted the area he and his mate hunted with a manifestation of Yog Sothoth.  His crude band of hobgoblin followers were liquefied, and his mate was rent into a whiff of plasma.  He is shaken and weakened, and hibernates without being detected by the pilot’s drones.  If awakened from his slumber he will kill every human  within miles and then move on to Marbourg.  No great matter to the pilot (or Vendel Re’Yune) but the hapless citizens of Marbourg would probably suffer high numbers of casualties.

Even further, the cult of Malkenruth’s ancestors has recently sent missionaries into this area who have been led to the keep by dreams and portents.  They seek out the Golden Idol of the Shining God but are somehow always driven off or killed when they do gain surreptitious entry into the keep - usually from the difficult northeastern scramble over the rubble of the destroyed outer wall there.

Lastly, the weird extradimensional energies that course through the area owing to its history and ley-line placement naturally mean that all sorts of strange demiplanar openings wink open and closed in the keep on a regular basis.  Beings from other planes and versions of Aereth pop in and out without understanding why they come and go, and the place is a favorite of fey-beings and Elves.  The King of Elfland and his allies have come to loose agreements with Sezrekan, Hecate, and other patron entities that the place is formally off limits, but this does not keep stray moon elf and dvergar tribes from wandering through and taking captives for sale or trade.

Sadly, after recovering from a spate of Zombie Fever, the citizens of Marbourg have left behind a brutal winter and are mostly unaware that travelers to and fro are at high risk for being brutalized by the Jackal gang, the pilot’s drones and zombies, elvish marauders, and other stray extradimensional wanderers that are generally confused and anxious to return to their nearest parallel universes of origin.
Posted by Noah S. No comments:

I'm at work on griming up some scatter terrain for 'twas Leman himself that said a field of battle without LOS blocking terrain is merely a contest of purchasing power.  In the Apocrypha Attitudinalis Vol 4, pp 3435ff.
Coffee cans plus TLC makes coolant towers or promethium storage, but no ganger or cultist in his right mind would pass up the opportunity to flaunt the Emperor's dicta against self/expression on so pristine a surface
So: a purchase of some things at Michael's today : paint pens, fresh bottles of cyan and bright red to counteract all the Pthalo Green
The paint pens are in hot pink and cloud blue and a tiny one in white for filigree n shit.  I think if you're going to spray paint some stuff that you might get in trouble for you may as well make it stand out
Anyways: pictures of works in progress (always a work-in-progress in this sector) 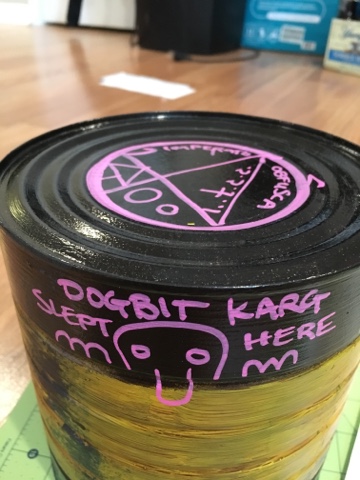 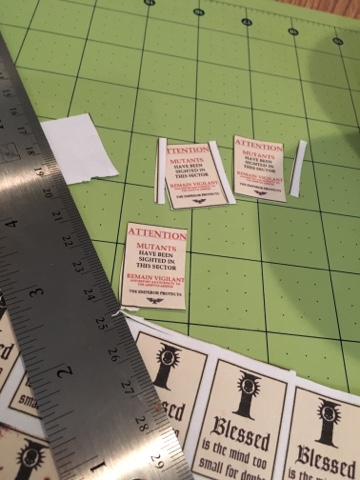 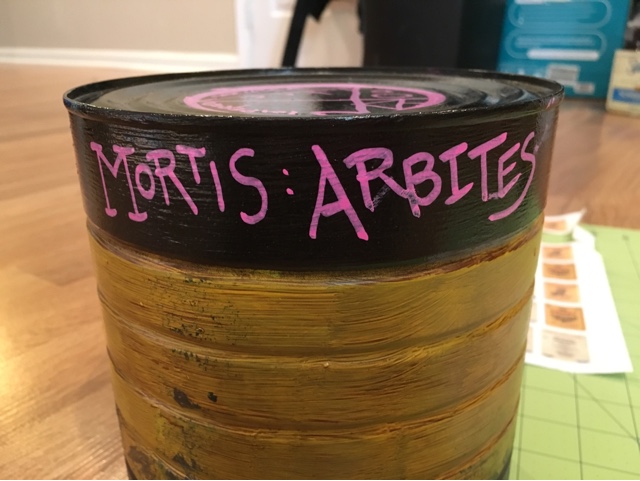 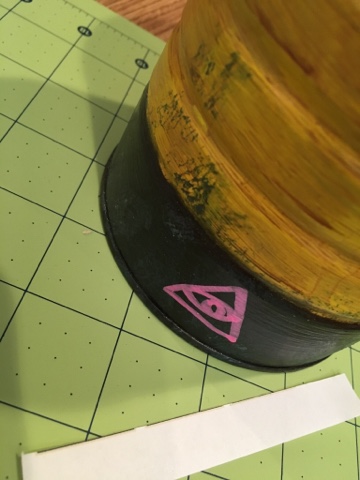 I highly recommend oil/based paint pens for this task and maybe I can do some actual graffiti by hand in big spray bomb or something
Posted by Noah S. No comments: